The inspiring life of Thierry Mugler

Thierry Mugler is a famous French designer, founder of the fashion house Thierry Mugler. He is also a director, screenwriter, photographer, and a creator of unique fragrances.

Thierry Mugler was born in the French city Strasbourg on 21 December 1948. As a child, the boy had a passion for painting, and in order to paint he frequently skipped school. His biggest dream then was to become a classical ballet dancer. At the age of 9 he began dancing, and at 14 he joined the National Opera in Rhine, where he danced for 6 years. At that time he also studies painting at the Strasbourg School of Decorative Arts.

How the brand Thierry Mugler was born?

At the age of 24, Mugler decided he want to see more of the world and leaves his hometown. He then moves to Paris and starts working as a designer in a small fashion boutique. Two years later, he was already making collections for several big fashion houses in Paris, Milan, London and Barcelona.

In 1973, Thierry creates his first personal collection called “Café de Paris”. It is based on the style of the 1950s and is characterized by exceptional femininity and urbanism when the unisex dominates the world’s fashion podiums. This frank sexuality is what later becomes the hallmark of the artist, and it continues in all his subsequent collections.

Mugler’s debut attracts wide public attention. One of the interested people was Melka Trenton, an influential fashion editor at that time. She helped the young designer to start his own career. So, in 1976, she asked Mugler to show his collection in Tokyo, a major event organized by the Shiseido brand.

In 1978, in Paris opened the first Thierry Mugler boutique. In the same year, Mugler made his first male line L’Homme Mugler, which brings him fame all around the world. He uses mostly bright, deeply saturated colors, also completely transforms the classic male image and making it more modern.

Mugler’s unique style becomes recognizable and its characteristics prevent it from being confused with anything else. The silhouettes remain in the mind with their purity and precision, the clothing is characterized by solid construction, broad shoulders, narrow cross, anatomical cut and an abundance of decorative elements. Most often, Mugler works with materials such as fur, vinyl, lycra and knitwear. In addition, each collection is inspired by a specific theme.

In the 80s and the 90s, Thierry Mugler became an internationally recognized and respected designer. His collections had already gained considerable commercial success, despite the fact that they were originally intended for very wealthy customers only.

In 1992, at the request of the High Fashion Syndicate, Thierry Mugler developed and presented to their attention his first Haute Couture collection, which allowed him to join the union and get the title of a high fashion designer.

In 1993, Thierry Mugler created Demi Moore’s famous black dress, which she starred in the film “Outrageous Proposal” with.

Losses and abandonment of the fashion house

Since 1997, the financial situation of the Thierry Mugler fashion house has deteriorated considerably. As a result of the losses in 2001, Mugler decides to leave the fashion house and to focus on his perfume line.

After Mugler, creative director of the brand becomes Jean-Luc Testu, but the continuing financial problems lead to the closing of the clothing brand in 2003. In 2005 the fashion house was reopened under the guidance of Thomas Engelhart, but the brand produced only male collections. In 2008, Rosemary Rodriguez became the creative director of Thierry Mueller Fashion House. After her, in 2010, stepped up Nicola Formicheti who changed the name to MUGLER, and still manages to keep it afloat and successful to this day.

A director, photographer and designer

In 1988, Mugler published his first photo book “Thierry Mugler, Photographe”. The album is dedicated to one of the designer’s passions – traveling. The first edition of his second book, the “Fashion Fetish Fantasy” monograph, includes photographs of Mugler’s designer items, including outfits for celebrities and designer’s friends.

Mugler also works as a director of short films, commercials and music videos, and makes costumes for musical comedies, concerts, operas, theaters. He has worked with artists such as Robert Ollman and George Michael (he directed the George Michael’s video “Too Funky” in 1992).

In 2002, Thierry Mueller collaborated with the world-famous Circus de Soleil, where he designed the band’s costumes and directed the production “Extravaganza” for the show “Zumanity”. In 2009 Terry Myugler worked as an artistic consultant for the world-famous singer and songwriter Beyonce. For her world tour “I Am …” he creates the costumes and choreography, sorts out the light and decoration. 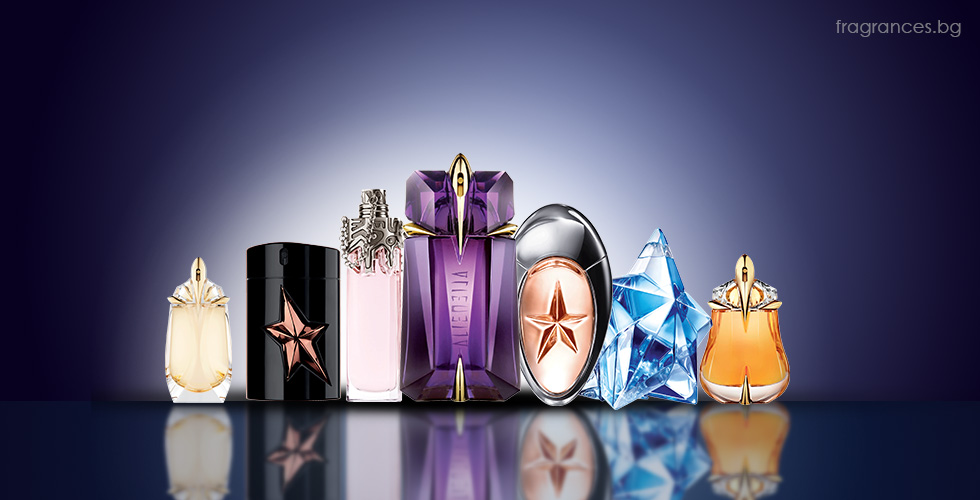 Thierry Mugler created his first fragrance in 1992 and named it “Angel”. This perfumes starts a new line of fragrances that do not use any floral notes. In the base of “Angel” there are notes of praline and chocolate, sandalwood, vanilla, melon, peach and plum, honey, bergamot, almond and amber blended with a strong accent of patchouli. “Angel” is a real revolution that is already considered a classic in the world of perfumes – all of the perfume’s aspects and notes do not full merge but also repel. It became the first oriental fragrance to be put into a perfume bottle in the unprecedented for women color: blue. The sophisticated perfume bottle was created by the famous Brosse Master Glassmakers and takes a form of a blue grass star. To this date, the fragrance is being reproduced more than 13 different times for different exclusive and festive variations.

The rest of the brand’s fragrances were designed to complement the Thierry Mugler range. Among them we can mention some famous perfumes, such as the male “A*Men”, the unisex fragrance “Mugler Cologne” and the ladies’ scent “Alien”. “Alien” became the second most famous brand fragrance. It was launched in 2005. It is inspired by the solar energy, full of light and hope. In 2005, Thierry Mugler launched the “Thierry Mugler Perfume Workshops” project. Its goal was to provide an accessible way for acquiring perfume skills and developing know-how in the industry.

Thierry Mugler is the creator of the innovative service “The Source”, which allows you to fill bottles with the “Angel” and “Alien” scents. For this purpose, the brand begins to produce special rechargeable bottles that can be ordered on Thierry Mugler’s official website. In 2008, Thierry Mugler created a line of high-end cosmetics Thierry Mugler.

In 2007, Mugler releases the “Mirror, Mirror” collection, which includes five fragrances, positioned as perfume-scams, without the characteristic smell, but with the idea of ​​”enhancing the sense of its presence.”

In March 2008, Terry Myugler launches a new project, the womanity.com site. This is a virtual spacewalk for self-expression where visitors can share their vision of what it means to be a woman today. The style of the site corresponds to the image of the “Womanity” scent that came out at the same time.

Famous Thierry Mugler perfumes you can find in our online store: