How are fragrances made?

If you’ve watched the movie “Perfume: The Story of a Murderer” then you’ve witnessed some of the oldest methods of perfume making – enfleurage, besides some pretty gruesome scenes.

People have been trying to mask their body odor for as long as they exist. There are no official records of when exactly they started to get into perfume making, but there is evidence dating back to Ancient Egypt.

The Egyptians would initially use perfume for their religious ceremonies by burning incense and aromatic herbs, such as gums, frankincense, and myrrh. Egyptian kings used fragrance for cosmetic purposes as well by smearing themselves with fragrant oil and calling it “the sweat of the sun god”.

Back then, perfumes were oil-based, as opposed to modern fragrances which are based on alcohol, whereas the raw materials used to make perfumes have played a very important role in establishing trade routes.

After Ancient Egypt, Persia, the Roman Empire, and China, Medieval Europe would also catch onto the perfume craze. In the period between the 12th and 16th century, there was a widespread belief amongst Medieval Europeans that bad smell can carry diseases, which is the so-called theory of miasma. They would carry an open case with a ball full of scented materials, which would ‘save’ them from spreading diseases. It was during that time, in the 14th century that the first European alcohol-based perfume was made under the reign of the Queen of Hungary, called Hungary Water.

Since ancient times, perfume-making has evolved a lot, turning it into a million-dollar industry, so much that it is estimated to be worth around 92 billion dollars by 2024 (source: Statista).

Perfume making involves the following processes – collection, extraction, blending, and aging. Of course, this does not include all the creativity that goes into the creation of the perfume formula itself, as well as the design of the bottle. 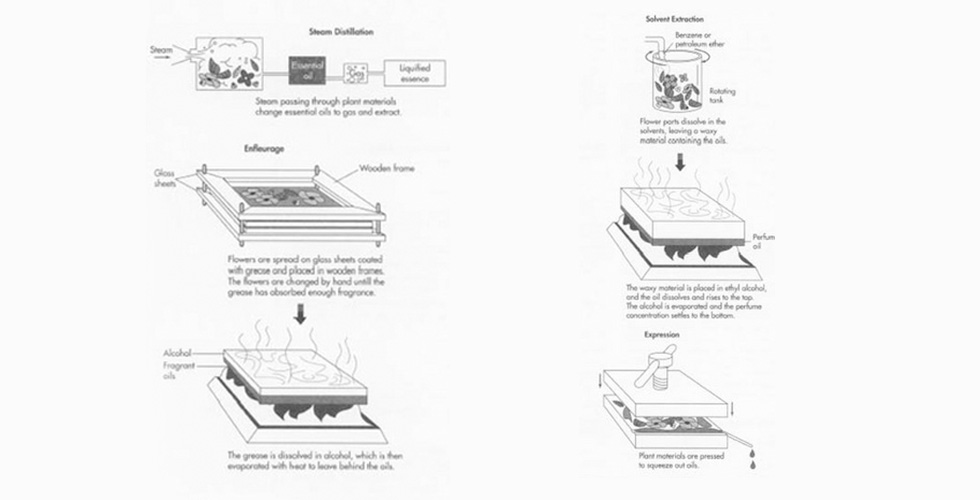 Before the extraction of fragrance oils begins, all the raw materials, such as natural ingredients like flowers, spices, fruits, gums, resins etc. need to be collected. The high-end luxury brand Chanel have their own flower fields in the perfume capital of the world – Grasse, France to ensure they never run out of flowers for their perfumes.

Some raw materials, such as lily-of-the-valley do not produce oil, so they need to be chemically produced to mirror the scent of the flower.

Did you know that you need roughly about 6000 roses in a 100 ml French perfume bottle?

After all the raw materials have been collected from all over the world, there comes the time to extract the oils from them.

Here are some of the most popular perfume oil extraction techniques used nowadays:

Cold extraction is a technique, which may relate to the production of olive oil, but it is also a popular method for extracting perfume oils. It is used mainly with citrus notes (orange, lemon, grapefruit, mandarin, lime, etc.) as their fresh and light scent wouldn’t survive any treatment that involves heat. During the process, numerous holes are made on the surface of the citruses’ peels and are then mechanically pressed to extract the fragrance oil.

Distillation is not only a popular technique for the production of spirits, but also for the extraction of scents from different plants, fruit blossoms, and fruits.

There are three different types of distillation:

Steam distillation: The ingredients are heated in a water solvent, and essential oils are being extracted by having steam go through them. Steam distillation is often used for the scent extraction of flowers, leaves, and stems.

Dry distillation: Here the process is similar, but the ingredients are heated directly, without the use of water. The method is often used for the extraction of amber and different wood notes, thus adding the specific ‘smoke’ effect.

Fractionation: This is a method in which different components of the raw material may be selected through distillation. In this way, the perfumer can control the process to a certain extent, by selecting the characteristics of the result. Despite its higher price, this method is widely used among perfumers, because that way unwanted scents can be eliminated, creating a unique perfume note.

Maceration is among the most often used methods for scents extraction. It is a technique, where the raw material is diluted in a solvent (such as dimethyl ether) that extracts the scented components. The aromatic compound is extracted through vacuum processing, in which the solvent is removed for re-use.

This is a popular technique for the extraction of perfume ingredients from plants that resist steam distillation as well as plants whose aromatic notes are too delicate and can be easily destroyed when heated. Among the most pretentious plants whose aromas are extracted with this method are daffodil, orange blossom, acacia, and jasmine. The purest and most concentrated form of essential oil – the absolute is extracted through maceration.

Enfleurage is among the oldest techniques for perfume production. It is a process that involves animal (saturated) fat, most often lard or tallow. With this method, the blossoms are “dressed” into a layer of animal fat, setting the beginning of a long process during which the fragrant components gradually pass from the plant raw material to the animal fat.

There are two main types of enfleurage – cold and warm.

With cold enfleurage, the process takes place at room temperature with the minimum external intervention.

With warm enfleurage, the process is done at a slightly higher temperature which helps the fat be better absorbed by the plant.

Enfleurage is used for the extraction of fragrance notes from delicate raw materials, such as orange blossoms, jasmine, and tuberose. Despite the fact that it is extremely sparing for the raw material, it is rarely used today as it is not economically effective when it comes to the time needed for its successful execution and the quality of the final product.

After all the fragrance oils have been successfully extracted, it is time to blend them together, according to the formula of the perfume creator. A perfume can have hundreds of ingredients and it can take years to master its formula. After the fragrance oils have been blended, they are mixed with alcohol, the concentration of which depends on the type of fragrance that is being produced. Eau de Toilette will have a larger percentage of alcohol as opposed to Eau de Parfum. 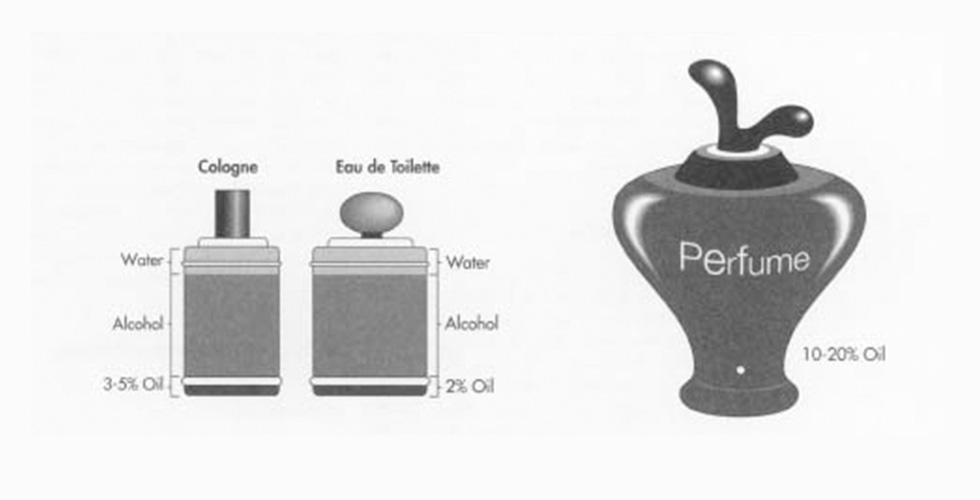 The aging process may take months or even years for finer perfumes. During that time, the perfume is stored in a dark and cool area, so that the fragrance oils and alcohol can really stick together according to the fragrance formula. The perfumer will then need to test the scent and see if it corresponds with the initial idea of it, and if it does not meet the perfumer’s expectations, samples will be returned for more blending and aging.

Nowadays more and more perfume houses are turning towards synthetic chemicals instead of natural oils. When thousands of flowers are needed to produce essential oils and the perfume industry is faced with the risk of a natural disaster or disease destroying those crops, then synthetic chemicals seem to be less risky, cheaper, and more consistent in quality.

Perfume making is an art, and just like the making of music, painting a portrait, or writing novels, it requires a lot of patience, talent, and love to create the perfect end-result.

Have you ever tried or thought about making your own perfume? If so, share with us, in the comments below, what would the main notes be.